New Report Shows That Hispanics Feel Invisible and Stereotyped In Television And Movies, More Than Any Other Multicultural Group 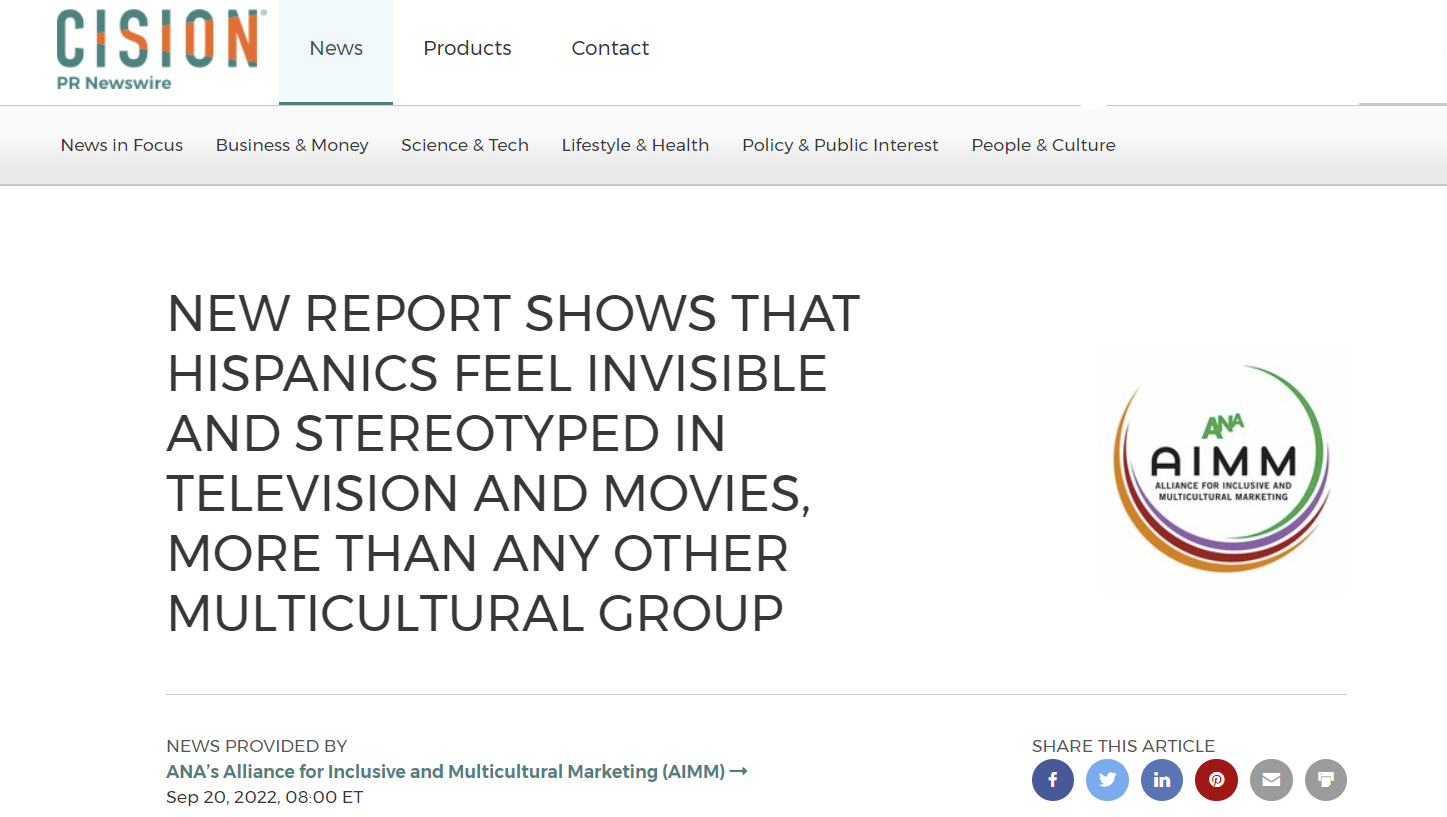 LOS ANGELES, Sept. 20, 2022 /PRNewswire/ -- As National Hispanic Heritage Month kicks off, a time of celebration, culture and pride, a new report by the Cultural Insights Impact Measure (CIIM)™, released by the Alliance for Inclusive and Multicultural Marketing (AIMM) shows that Hispanics feel more invisible and stereotyped than any other group when it comes to their representation in television programs and movies.

Despite big promises made to invest in diversity and inclusion, the entertainment industry has a long way to go. AIMM is committed to holding the industry accountable and has a legacy of doing so. During the 72n Annual Primetime Emmys, AIMM issued a powerful, award-winning PSA called, "Here," featuring celebrities such as Lin- Manuel Miranda, Billy Porter, Daniel Dae Kim, and other A list celebrities declaring their intention to stay both visible and vocal on-screen to ensure all identities are authentically represented.

"While we're thrilled to see some progress made, we are unfortunately not surprised by our new findings, given we too feel stereotyped and underrepresented in the content we consume every day. It's time for the industry to see US, see ME and see ALL, and we're committed to holding the industry accountable to make real change," said Lisette Arsuaga, Co-Founder of AIMM. "As a Latina woman, I'm tired of being invisible on-screen – or seeing Latinos and Latinas represented in ways that demean our segment. It's time to put an end to this. As marketers, we have the power to invest in programming that celebrates us and does not denigrate us."

To learn more about the report or get involved in AIMM, visit anaaimm.net.

The Cultural Inclusion Accelerator Report Card is based on AIMM's proprietary measure tool, CIIM™ (Cultural Insight Impact Measure) which has tested nearly 800 shows and movies, most of which were selected by utilizing the latest Nielsen audience composition data, while some additional shows/movies were included from trade publication reports based on inclusivity and storylines. This ongoing study has over 275K individual CIIM Content evaluations across 7 segments (47K Asian, 64K Black, 5K Indigenous Communities, 69K Hispanics, 53K LGBTQ, 60K People with Disabilities, and 84K White Non-Hispanics). Respondents self-selected movies and/or shows that they are currently watching or have watched. From there, respondents were asked a series of questions on each of their selected shows or movies based on 10 key cultural attributes:  cultural values, representation and celebrations, pride, respect, identification, authenticity, unbiased, respect, and positive role models. The cultural attribute scores are aggregated in a proprietary algorithm that determines their ultimate CIIM cultural relevance and score/grade.

About the Alliance for Inclusive and Multicultural Marketing (AIMM)

ANA's Alliance for Inclusive and Multicultural Marketing (AIMM) was established in 2016 to provide corporations with viable solutions for growth by addressing opportunities in Multicultural and Inclusive marketing. Over the last five years, AIMM has tackled cultural and societal issues from Black Lives Matter to anti-Asian hate crimes to threats against the LGBTQ+ community – elevating the conversations, codifying support, and making an impact to ensure all groups are treated fairly through its #SeeALL with a mission to ensure our screens reflect the diversity witnessed on our streets.

AIMM comprises senior-level advertisers, media/publishers, research and data companies, ad agencies, and trade organizations, to spotlight the missed growth potential in Asian-American, Black, General, Hispanic, Indigenous Communities, LGBTQ+, and People with Disabilities markets. This extraordinary working group of industry leaders is transforming the way multicultural and inclusive marketing is seen and understood via an industry-wide reboot – the largest ever in this space. Beyond simply identifying where growth potential lies, AIMM shows its members (and the industry) how to best maximize this potential towards positive bottom-line impact. AIMM is the leading authority in the space.