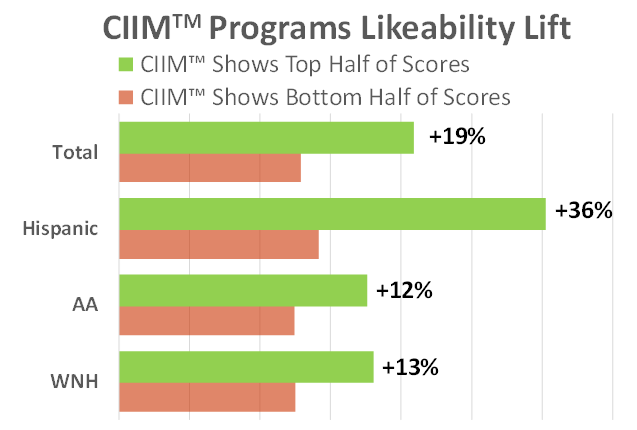 For this study,AIMM, in partnership with NBCUniversal and AIMM member companies, gathered more than 20,000 show evaluations from 10,500 Hispanic, African American, Asian,People with Disabilities, LGBTQ and non-Hispanic White TV viewers across 60 Nielsen top-rated programs, including both Endemic and Non-Endemic networks and shows. While nine of the cultural attributes measured played a significant role in overall show likeability, five in particular drove greater impact between shows scoring below average and those above average: Acknowledgement & Inclusion (you see me); Reflect my Cultural Values, Positive Depictions and Role Models (you get me); and Celebrate my Culture (you celebrate me).

CIIM™ also evaluates advertising creative, assessing the impact of cultural insights on relevance, ad effectiveness,brand and programming preference, and purchase intent. Bob Liodice, CEO, Association of National Advertisers, said, “As industry-shaping metrics go, CIIM™ is the holy grail. It makes businesses and brands better by maximizing the cultural relevance of advertising, providing better reach and improving marketing effectiveness. Programmers are then able to gain valuable insights into content that resonates with both audiences and advertisers.”

Carlos Santiago, AIMM Co-Founder and President, Santiago Solutions Group, who led the CIIM™ study team, says: ”Measuring the value of cultural inclusion across both advertising and programming empirically proves that culture matters as much in program content as it does in advertising creative. CIIM is a much-needed tool empowering marketers to connect culturally while investing wisely.  Our expectation is that it will become an industry metric for corporate growth.”

Initial CIIM™ results, released in 2019, proved that ads with genuine cultural reflections significantly lift brand opinion and ad effectiveness resulting in higher purchase intent three times higher than ads in the lowest CIIM™quartile.  AIMM is quickly expanding CIIM’s scale. This Spring the breakthrough measure will be applied to approximately 250 shows evaluation and 250+ spots, with results anticipated just prior to upfronts.

"Audiences of all backgrounds crave and deserve stories that authentically represent them,” said Laura Molen,President, Advertising Sales & Partnerships, NBCUniversal. “CIIM demonstrates the importance and value of diverse storytelling. We are honored to be a part of this AIMM effort to propel the media and advertising industry forward."

Key findings from the CIIM™ television programming study include:

·        Diversity Matters: Among non-multicultural targeted programs measured in the study, shows with highly diverse casts attained cultural relevancy CIIM™ scores significantly above shows with less diverse casts. A single character representing a different culture or minority within a program did not guarantee a cultural connection; rather, the study found that preference extend far beyond simple inclusion to focus on key factors such as accurate reflection, positive portrayals, and authentic story lines.

·        Endemic Media Matters from Hispanic Audiences: Another key finding revealed by this CIIM™ study is that in-language programming (“endemic”)attains the deepest cultural connection as seen with Hispanics, especially among viewers of both English and Spanish media. Among Hispanics, shows like Univision’s La Rosa de Guadalupe and Telemundo’s La Reina del Sur attained higher CIIM™ scores than most shows from Non-Endemic English networks.  Unfortunately, non-endemic platforms have virtually no programming featuring Hispanics as main characters in a cultural context, and in a positive light, affecting overall CIIM™ scores for programming in non-endemic platforms.

·        Representation and visibility of segments can lead to loyalty when present: Hispanic viewers have greater ‘network loyalty’ when it comes to cultural relevancy, while African American audiences respond to culturally appropriate shows. While there is inclusion of LGBTQ, Asian and People with Disabilities in programming today, there are no LGBTQ or Asian-dominant shows in Nielsen’s Top 60.

·        More Work is Needed: Only six out of the 60 shows measured –NBC’s Chicago Fire, Chicago Med, America’s Got Talent and World of Dance and Fox’s Star – scored above the norm among the three largest segments (Non-Hispanic Whites, Hispanics, and African Americans). This proves much more work is to create a truly representative TV programming ecosystem.

NOTE: CIIM’s television programming study was first-of-its-kind, but it did include several limitations. Sports and News were not rated. Since they are not considered scripted entertainment and have no story line, news and sport programs fell outside study parameters. Within the 60 programs tested, no LGBTQ specific programs or Asian dominant shows were included.